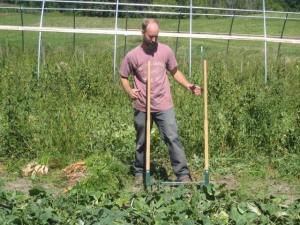 Each year we typically add a new tool or two to the farm arsenal. This year, after breaking about 5 potato forks last year, we picked up a broadfork from Johnnys in Maine (it’s even made in Maine). As you can see from the picture it is like a potato fork but with two handles. It’s a strong steel design with about 15 tines on the bottom that even I haven’t been able to break yet. A broadfork is designed for deep tillage or aerating ground so as to break up hardpan or the area at the depth of a plow or disk where the ground is quite hard. I use it to harvest potatoes and I’ve found it to work great for harvesting carrots where I can dig a foot and a half of the row instead of the 8 inches with a traditional potato fork. Cool.

Like everybody we try to find those tools which make out life a bit easier and fit our scale. The tempation in this kind of work is to put a motor on everything. Sometimes that makes sense, but I always say “but then I have to take care of another engine…” I guarantee my broadfork will work when it’s rainy or cold or hot – more than I can say for my snowblower.

In the box:
Watermelon: Most everybody should have received a yellow variety called Sunshine, although some of you hit the jackpot and got a new variety I grew called Orange Sherbert – they look the same from the outside so it’s a surprise. Man, these are nice.
Melon: Most everybody got a white-fleshed Ananas variety called San Juan, although some got a green-fleshed Galia melon called Diplomat.
Sweet Corn
Russet Potatoes
Leeks
Italia Pepper: This is the long green-red pepper…it is sweet, not hot. This first flush aren’t the prettiest, but I wanted to get some in the box, because, if you’re like me, you’re getting impatient for some colored peppers.
Islander Purple Pepper
A Roma Tomato Mix: I thought we’d switch up from the standard slicing varieties for a week. The yellow romas are nice – they are either a variety called Powers or Golden Rave. The reds are San Marzano.
Carrot Bunch: Mixed varieties again or standard orange with some Atomic Red or White Satin or Yellow Sun mixed in.
A Couple Cucumbers
Japanese or Italian Eggplant: It’s Japanese if it’s long and slender or a varity called Nadia or Zebra if standard eggplant shape. They cook and are prepared the same way.