Today made me think about how busy you get when you begin to combine activities. We all have those things we do, have experience doing, and, consequently, are good at. For me, this is growing produce. We’ve been doing this a while-9 seasons-and, granted, we get a lot of things wrong every season, but we got it down for the most part.

This season, of course, we just had to challenge ourselves (as if having a third child wasn’t enough) by branching out into raising chickens. Today was one of those days when I had to layer this new enterprise on top of my usual routine, which makes for a busy day. 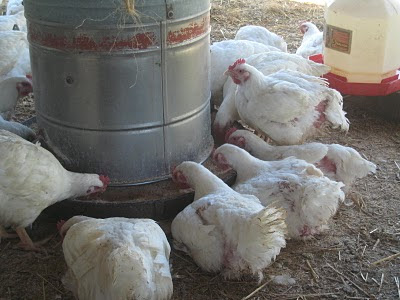 Usually I can get outside and start harvesting produce on Fridays before 7 am, but, today, I didn’t get out into the field until nearly 9 am because the chickens had a date at the processors in Ashby at 7 am (this is one of the few USDA-inspected poultry processors people like I can bring poultry to in the nation–even growers from central WI cart birds up there). So, instead of hunting for melons this morning, I was on the road at 5:30 with a 20-foot trailer and 90 chickens in the back, cruising down the interstate. This is actually a really nice way to start the day, having that first cup of coffee with the rest of the world asleep. Once at the processors, it’s time to catch and move birds two by two into crates to go into the plant. This isn’t as pleasant an activity, but it needs to get done. They cooperated for the most part and I only had one escape and hide under the trailer on me. I kept thinking the people of Ashby must come down to watch some of this entertainment of people unloading and chasing chickens around.
Anyway, we have another load going down to the processors in two weeks and can start making arrangements to deliver the broilers people ordered in the spring. Although this morning chore set us back a bit today, that’s just what’s needed sometimes as we juggle all the different chores that comes with being a diversified farm (livestock, crops, pasture, garden).
In the box:
Melons: everyone got a cantaloupe and either a watermelon or yellow Spanish melon
Red Tomatoes: standard Celebrity variety
Juliet Roma tomatoes
Eggplant
Beets: These are pretty small and pathetic, I know, but I figured some beets are better than no beets at all
Leeks
Arugula: oakleaf-shaped greens in a bunch
Daikon Radish: Don’t be afraid of this one, check out the recipe below.
A few peppers: Red ones are Italia Peppers and green are Biscayne
Yukon Gold Potatoes
Garlic
Daikon Radish and Carrot Salad
From The St. Paul Farmers Market Cookbook
1 4-inch piece of daikon radish, peeled
2 tsp. salt
2 med. carrots, peeled
2 c. ice water
3 T. dressing
Dressing:
1 T. soy sauce
1 T. sesame oil
Use a vegetable peeler to peel down the radish lengthwise, making long thin shreds. Put shreds in a bowl and sprinkle with 1 tsp. salt. Cover and refrigerate 1 hour. Cut carrots in half lengthwise. Use a vegetable peeler to peel down the carrot half, lengthwise, making long thin shreds. In a large bowl, combine ice water, remaining 1 tsp.. salt and the carrot and radish shreds. Wix well, cover and refrigerate 1 hour.
Make the dressing. In a small bowl, combine soy sauce, sugar and sesame oil. Stir until sugar is dissolved. Cover and refrigerate until ready to use. Rinse radish and carrot to remove salt. Drain. Toss with dressing and chill.