Every year we generally see the same kinds of bugs, however, every year brings new variations and the 2011 season is no different.

The big change this season that I have never seen before is grubworms in the potatoes.  Yes, the same ugly white grubs that you may find in your sod when you tear up your lawn.  A potato or two may have gotten past me and into your box where a crater is eaten into the side…that’s the grub’s signature handiwork.  My neighbor of 70-plus years has never seen this, so it makes me wonder what’s going on.  Is it just the hot soil temps which cause them to thrive? 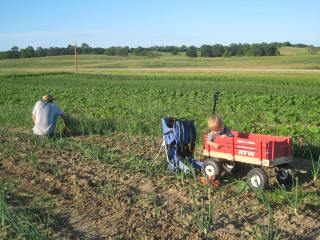 The potato bugs are worse than usual, but cucumber beetles are just not to be seen.  This is a situation I can live with since the cucumber beetles are very tough on a large family of produce from melons to winter squash.  Slugs, on the other hand, have been taking their toll.  It’s strange though, since this is the first year I’ve ever seen them.  They messed with the strawberry crop a bit and I see them in the tomatoes too, but nothing we can’t manage.  I hope it stays that way.

News: We’ll be hosting a work day for members this Sunday afternoon (anytime between 1-4 – weather permitting).  This is by no means mandatory, but a chance to visit the farm and get your hands dirty.  Come if you can.

In the Box:
Purple pepper: always the first pepper for some reason.
Sweet corn: not a dozen yet, but it was typical “hunt and peck” exercise when a crop first comes in.  I always think there’s more there than there actually is.
Cherry tomatoes: most are an orange variety I really like called “sungold,” but there are also some Isis ans traditional red cherry tomatoes in the mix too.
Cilantro
Parsley
Cucumbers
Yukon potatoes
Red onions